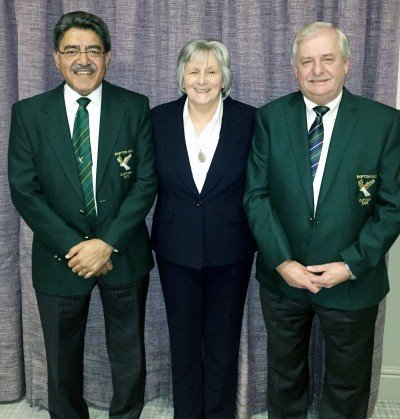 Nick, who lives in Ilkley, came to Yorkshire 26 years ago as a consultant urologist at Airedale General Hospital, Steeton, and has been a member at Skipton ever since he arrived. “I considered it to be an honour to be elected captain of the club in 2011 and feel the same for being the president this year,” he said.

New men’s captain Ian Sewell also has a medical background. He was born in Barrow in Furness and has lived in Sutton-in-Craven for the past 40 years, moving there initially to work at Johnson & Johnson in Gargrave for 17 years, where he finished in the role of site production manager, before setting up his own business consultancy advising and managing projects on medical manufacturing.

From 2011 to 2017, he headed a decontamination company, IHSS, in London as managing director for six years before retiring. He and his wife Christina have two children and three grandchildren.

Ian joined Skipton Golf Club in 2014. He commented: “Despite the inclement weather last year, the greens staff managed to maintain the course to an excellent standard and our strategic aim will be to maintain the continuous improvement that’s been seen over the last few years in presenting the course in an ever-improving condition.”

Ian noted that the junior organiser role was now open due to Sylvia Eastwood’s retirement and he thanked her for her commitment and many years’ of service. He said the club would ensure the future of the junior section by implementing the Safe Golf Certificate during 2020, now a requirement of the Yorkshire Golf Union.

“On a really positive note, membership is looking up at the moment and we already have increased numbers over last year. On the social side, we have been looking at ways to increase the number of mixed and fun competitions this year and activities that are directed at families and the local community.

“It will be great to get the local community to visit the club and hopefully enjoy themselves, creating a wider knowledge of what the club can offer them,” said Ian who announced that his men’s captains charity will be The Air Ambulance Service, which his family have supported for many years.

New ladies captain Ros Moloney has been a Skipton member since 1992. She has served on various committees and was also ladies captain in 2013 and lady president in 2016.

Ros, who has chosen local charity “ThisIsLuke” for her fund-raising efforts in 2020, said: “The ladies section, although quite small, is very active in both social and competitive golf. In addition to ladies’ competitions, we have arranged several mixed competitions and knockouts this year, while various social events throughout the year are being arranged.

“In addition, in 2020 a second group of ladies started with our “Get into Golf” programme. Many ladies from the first group now have a handicap and enjoy both competitive and social golf. It is my hope that we can continue to build on this success and attract not only ladies for the ladies section, but also girls of all ages to join our junior section.”

Nick and Ian received their club jackets at a special general meeting of the club this month from their respective predecessors, as did Ros her lady captain’s badge.