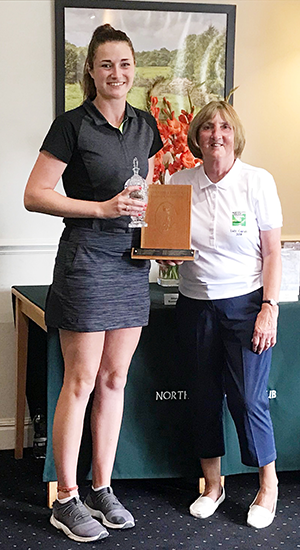 Played over three days at Northcliffe Golf Club, Shipley, last week, 22-year-old Lucy, from Skipton, finished among the top eight in the competition, open to all clubs in the Bradford & District Union of Golf Clubs, shooting both the opening day’s best gross and net to qualify for the matchplay.

She then won the main competition by shooting level gross, going on to beat Northcliffe member and 2017 title winner Hannah Choudray in the final on the first extra hole by chipping in for a 2.

It was the latest in a long line of golfing accolades for Lucy, who joined Skipton Golf Club as a junior in 2006 aged ten. She is a former junior captain and has now returned to the United States to complete her fourth and final year of university golf scholarship.

Lucy figures among a good number of young, up-and-coming golfers who have progressed through the junior ranks at Skipton and are now making a name for themselves, at the same time helping to put the name of Skipton GC firmly on the map.

Another is Max Berrisford, of Steeton, who was called in to take part in the England Under 18 Championships, which took place at Fulford GC last week. Max, who has the lowest junior handicap in the Bradford & District Union of Golf Clubs, came within a whisker of qualifying for the knockout stages, though didn’t quite make it.

He joined Skipton as a 12-year-old and was junior captain last year. He also plays for both the Bradford Junior and Men’s teams and is a former Bradford Boys champion. Max has now turned 18 and will be leaving the junior section at the end of the year, hoping to progress to bigger and better things at club level and beyond.

A third aspiring and rapidly improving young golfer, Harry Ayrton, from Eastby, is also competing at St Andrew’s this week in their Junior Open and has a chance of qualifying for the knockout stages. Harry, who joined Skipton aged ten in 2011, is also a regular in the junior first team and has been in superb form this season.

Meanwhile, with two matches still to play, wins against Woodhall Hills (6-0) and Bradford A (4-2) have put the juniors in a strong position in the league. Currently lying in second place with games against Ghyll A and Bradford A still to be played, Skipton are in with a chance of taking the title, although the match against Ghyll will be a tough one.

Every Tuesday evening at Skipton is junior roll up, open to anyone under 18 who would like to start playing. Coaching is with PGA-qualified professional Ben Mallinson, from Bracewell in West Craven, who continues to promote junior golf development at the club.