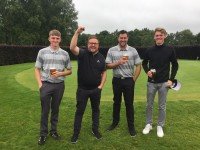 The victorious team with a very happy Captain of the squad, Chris Payne.

The Skipton Golf Club team comprising Max Berrisford, Gavin Stocker and Harry Ayrton, gained promotion in today’s Yorkshire Union of Golf Clubs 4th Division Team Championship held at Scarcroft Golf Club. This is the first time that the Club has achieved promotion to the 3rd Division and they can now look forward to participating in the next Team Championship which takes place at Bedale Golf Club on Wednesday 26th June.

The early starters, Skipton being one of them, were met by high winds and driving rain for most of their round and this meant the Championship being decided over just 18 holes instead of the usual 36. Max Berrisford individually finished third overall with a 74 while Gavin carded 77 and Harry a hard earned 83. A terrific team effort which saw their combined score of 234 place them in one of the promotion places. The overall winners were the form team from Scarborough North Cliff who finished on 225.

Congratulations to the team and let’s see if we can take some support to Bedale as they try to gain yet another promotion. Well done team.