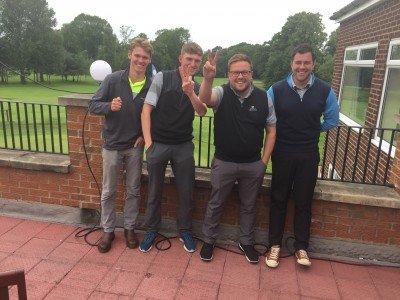 The unprecedented run of Skipton Golf Club’s Scratch Team in the Yorkshire Union of Golf Clubs Team Championships continued apace today when they gained promotion for the fourth time this season! This is a history making run and will now see them compete in the 2nd Division Team Championships at Doncaster Golf Club on 10th July.

This wasn’t an easy day for the team as they were first to tee off at 7.10am in the two round competition held at Bedale Golf Club in North Yorkshire. The course had received a huge amount of rainfall the previous day and it was remarkable that they were able to present it in such great condition albeit there was little run on the ball which made it tough for the early starters. This was reflected in the morning scores where Skipton shot a cumulative 235 strokes with Harry Ayrton suffering particularly on the difficult greens and seeing several putts lip out. The score left them in tenth place and with little optimism that they could gain their fourth consecutive promotion.

However, after a team talk from Chris Payne, Harry, Gavin Stocker and Max Berrisford came out with all guns blazing and what a remarkable performance they all put in over the second 18 holes. They recorded the second-best total of the afternoon – 219 strokes, which took them from tenth into second place overall, only being edged out by winners, Hallowes Golf Club. It was fantastic to watch the quality of golf that these three very talented individuals played and we wish the Scratch Team the best of luck as they seek to make further history at Doncaster Golf Club early next month.