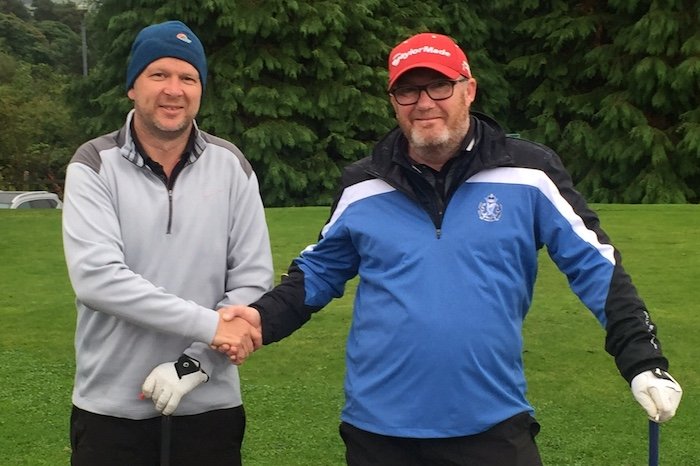 This year’s Craven Herald 8-15 Trophy Final was contested at the weekend between George Myles and Mick Riddiough. These two were well matched, both playing off 11, and this proved to be the case with the contest finally settled on the second extra hole.

Both struggled for their best form over the first few holes leaving them level on the 5th tee. A succession of excellent pitch shots leading to 4 out of 5 pars on the remaining holes on the front 9 left George 3 up. However bunker problems on 11 and 12 for George allowed pars from Mick to reduced the match to 1.

Both made par on the 13th and the match really came to life around amen corner. Mick had an excellent birdie on 14, sinking a twenty foot putt to level the match. He followed this by chipping in on the 15th to take the lead for the first time. With a decisive momentum shift in the air Mick hit the green on 16 to pile pressure on George. He responded with the shot of the match, a 4 iron which never left the 16th flag. Both missed birdie putts and Mick was still one up on 17. It was Mick’s turn to find the green side bunker and a par from George left the match All Square on the 18th tee. A 15 foot putt by Mick for par left George with a 5 foot knee knocker to prolong the match. He drained this and we walked back to the 1st.

Both made pars on the first extra hole. Mick’s recovery from 3 down was based on a succession of excellent tee shots, this made it all the more surprising when a wayward tee shot flew just out of bounds in the field to the left. Mick reloaded but unfortunately repeated the shot with a second tee shot in the field to end the match. A sad end to an excellent contest played with great sportsmanship.

Victory for George built on a display of scrambling pitch shots that frequently kept him in the game.

Commiserations Mick, great effort from 3 down.